As a frequent Walt Disney World go-er, it's hard to not compare Disney World to Disneyland. Comparing Disneyland to Disney World is like comparing two different countries. I will give some comparisons though just so you can understand some of the differences if you frequent one park over another.

Disclaimer: I don't claim to be an expert, but I do feel like I have gone enough times to give adequate reviews. Also, these are just my personal opinions from my experiences, so please keep that in mind when reading my reviews. I would always suggest you experience these things for yourself!

One land I was so excited to see was Toon Town. I was so upset when they got rid of it at Magic Kingdom in Orlando. (Don't get me wrong, I do love Fantasyland) I remember coming to Toon Town as a kid (it seemed much bigger then) and it was always my favorite area. I knew my kids would instantly love this part of the park. I love how everything is interactive and you can "let the kids loose" (to an extent of course). 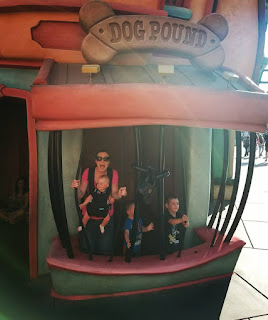 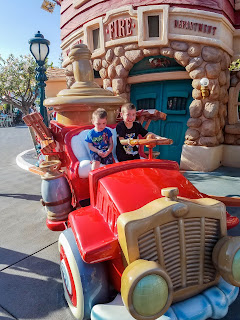 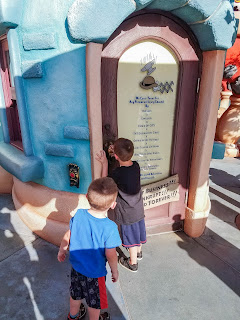 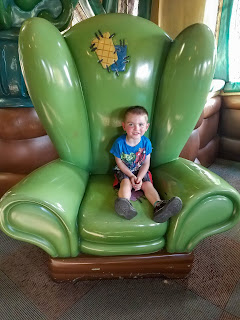 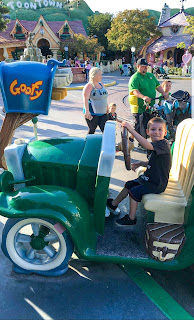 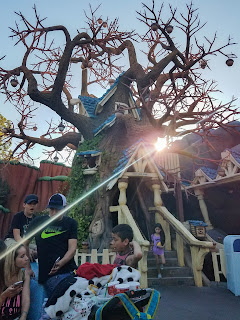 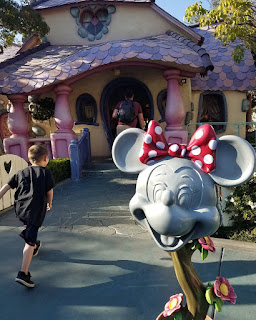 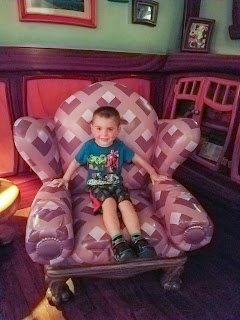 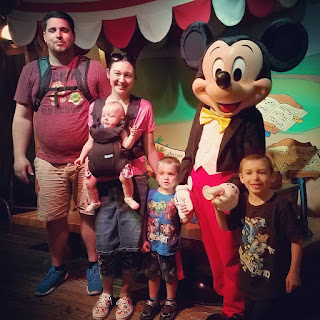 There was so much to see and do in Toon Town! At the end of Mickey's house was a meet and greet with the mouse himself! The wait wasn't very long at all and they had enough to keep the kids entertained they didn't even realize they were standing in line.

One thing I remember as a kid, and was still true to this day, was characters! At Disney World, there is always a formal line and designated spot for characters, no matter where they are. At Disneyland, some characters just free roam around and it is amazing. It feels so magical! The only downside I had with it, is if you really wanted to see a character, it was a little hard to get that time like you would at Disney World. If you didn't push yourself through, someone else would jump in front of you, which with young kids, it's hard to explain to them that some people don't know how to wait their turn. However, the characters were absolutely extraordinary! 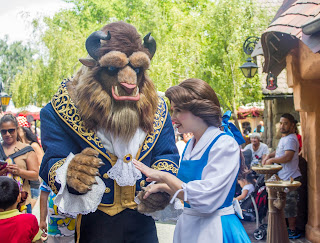 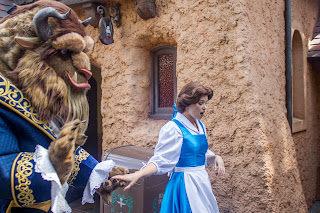 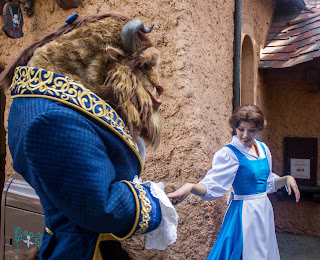 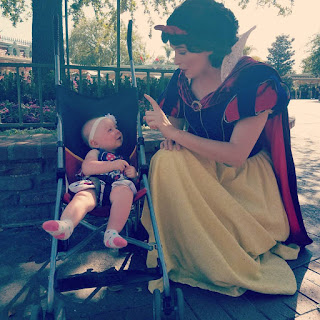 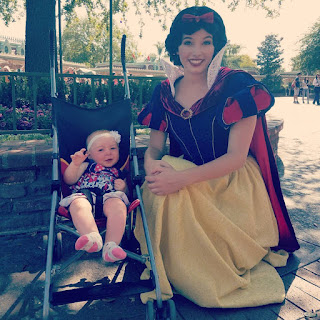 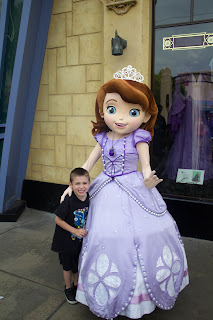 Something that was so magical that we didn't expect was that you can actually walk through Sleeping Beauty's castle! Yes, you can go into Cinderella's Castle at Magic Kingdom, but you need a dining reservation for that. At Disneyland, you get to walk through it and it is the story of Sleeping Beauty. We kind of just stumbled across it, we saw a door open and weren't sure if we were even allowed to walk through it. 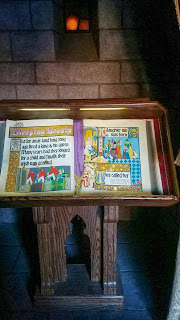 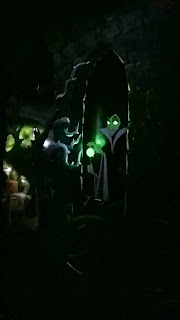 How about the food!?! My husband and I are such foodies when we go to any Disney park. Our favorite thing is the food and wine festival at Epcot. Of course we were excited to be able to try something new this trip.

Beauty and the Beast is our favorite movie, so when we heard about the Red Rose Tavern, we HAD to go! I wish I grabbed more pictures (story of my life with this trip). The way they had the gray stuff was much better than I've had at Be Our Guest Restaurant at Disney World. 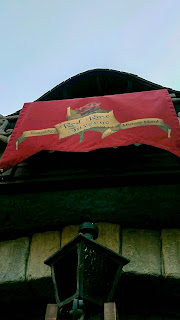 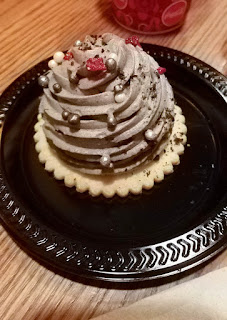 Another place we tried was in Disneyland and had Mexican food (the name of the place escapes me). Besides the food being delicious, one thing we noticed is that we got actual plates and silverware to eat with! This was a shocker for a quick service that it wasn't just throw away dishes. We felt fancy. The dining area was also nice and plenty of room, we didn't find it hard to find a table for our family. 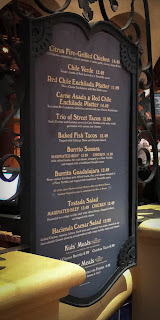 Rides! Rides! Rides! Rides! This is what most people enjoy the most! I know it's a highlight for our family. There are so many differences between Disney World and Disneyland rides, but they are all so unique in their own way. I will admit that It's a Small World is hands down ten times better than the one at Disney World. (I can't believe I didn't grab a picture, I was having too much fun soaking in all the magic not behind a camera)

I couldn't decide which Pirates of the Caribbean I liked the best. They were both so similar and yet so different. 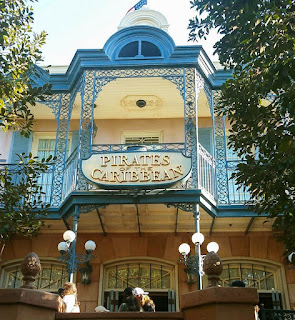 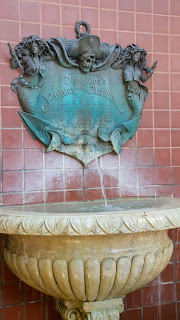 I absolutely loved Fantasyland at Disneyland, there were so many rides, that we didn't get to do them all, and all my kids were able to ride almost everything! 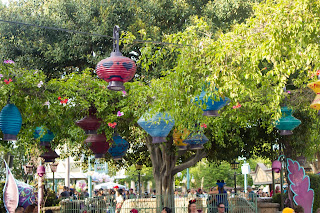 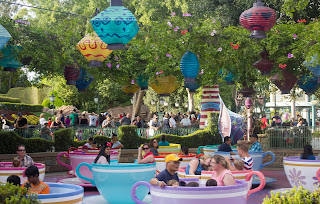 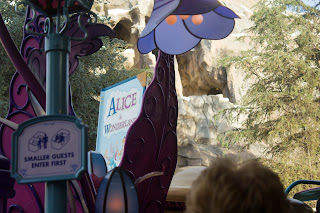 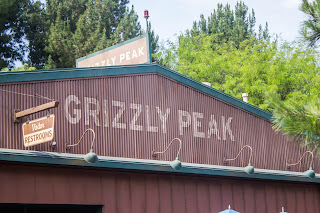 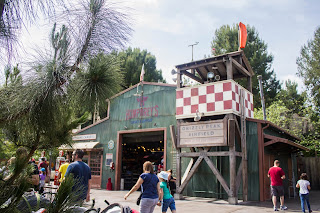 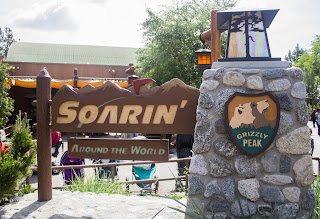 One ride we needed to make sure we took the time for was California Screamin'. I remember this ride from when I was a kid and wasn't going to miss it this trip.  This was the first ride I rode that went upside down. Since none of our kids were tall enough to ride this, we had to parent swap it. 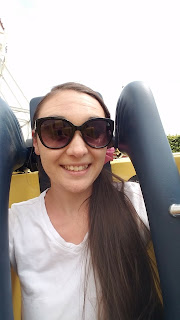 Speaking of parent swap, this did not seem to run as smooth as it would at Disney World. Each ride had it's own rules and we were confused half the time on what exactly we needed to do, so we had to ask at every ride. NOT ALL, but most cast members we encountered, either didn't give us correct information, or seemed annoyed that we needed to parent swap. We were very disappointed with how many cast members we encountered that were very unmagical. BUT, all the rest, went above and beyond the magic, there didn't seem to be a happy medium.

My husband is absolutely hates ferris wheels, but agreed that if we ever made it to Disneyland, he would ride the one in California Adventures. Lucky for him, we never got a chance to actually ride it. (Maybe next time) And of course I didn't even grab a single picture either. (I'm not sure what I was thinking this trip)

A main attraction for California Adventures is Cars Land. I purposely didn't include it in this blog as it will be in a later one.

Thanks for reading and I hope it helped you in some way!

Posted by Alison Shane Weddings at 8:47 PM No comments: